Pros and Cons of Cloth Diapers

Home/Beginner/Pros and Cons of Cloth Diapers
Previous Next

Pros and Cons of Cloth Diapers

You all know I love cloth diapers! I’ve been very vocal about the benefits of using cloth diapers, and I have been working hard to debunk some myths surrounding them. However, nothing in this world is perfect. In order to help you make the most informed decision as possible, I’m going to discuss the pros and cons of cloth diapers. I hope this will help you to have a realistic picture of what cloth diapering looks like for the average family, for better or for worse!

Note: I am a strong supporter of all parents doing the best that they can with the circumstances that they have. I understand not every family that is interested in cloth diapering will end up choosing to go that route. My hope is that I can help you make the most informed decision possible.

There are several pros to using cloth diapers over disposables.

1. They have the potential to save you thousands of dollars.

I’ve discussed this in a few different posts already, but no matter how you spin it, it would be incredibly difficult to say that cloth diapering does not save a family money.

The only instances in which it might not save you money are if you have a shopping addiction (because let’s face it, they’re so cute and fun to buy!), or if you buy a full stash and give up on using them.

Despite how obvious it is that in the long run you save money, many naysayers still try to say that it is more expensive. I have searched and searched and cannot find any sound basis for those claims. I can only assume it is the sticker shock of looking at what the upfront investment is for cloth diapering combined with denial about what disposables actually cost.

These people might also be forgetting about gifts of diapers they received at baby showers that allow them to purchase fewer diapers on their own–it may have saved them money out of their own pockets, but it was still money spent.

2. They keep several thousand disposable diapers (per child!) out of a landfill.

Babies go through on average 5 diapers (older babies/toddlers) to 10 diapers (newborns) per day. In the first year of a baby’s life, that is between 1825 and 3650 diapers. If the average age for potty training is 2.5, that means anywhere from 4562 to 9125 diapers will end up in a landfill over the period of one child’s time in diapers. That is so much higher than I would have guessed before doing the math!

The most commonly cited number for how long it takes for a disposable diaper to decompose is 500 years. I have spent time researching this because honestly, I don’t WANT to believe that. Also, hyperbolic fear-mongering claims are one of my biggest pet peeves, so even if I agree with the general premise, I try to stay away from using them. But when I was researching this issue, I simply can’t find any sources that say anything different. If I’m wrong, please tell me and send a source, I’d love to be corrected.

This is kind of a big deal! I’ve seen estimates that diapers are about 2% of the world’s waste. It doesn’t seem like much, but considering that diapers aren’t a constant expense from birth to death, not every family has children, and many more families are choosing cloth nowadays, it makes more sense.

2% may be small, but it’s actually pretty scary to me considering how many diapers we go through–that just means we generate even more waste than we realize on top of diapers. Any little bit helps, and if using cloth diapers is one thing I don’t mind doing, then I should do my part to be a good steward of the earth.

They really are so cute. Babies with adorable fluffy butts make me so happy!

Cloth diapers allow for more air circulation than disposable diapers. Air circulation is the best thing for preventing and treating rashes. Also, some babies have sensitivities to certain chemicals in disposables. These chemicals may also cause rashes.

Some people say that their cloth diapers gave their babies rashes. This is very rare, and it’s puzzling without more context into people’s individual situations. There is nothing about a cloth diaper that should cause a rash on its own.

If your baby is getting a rash in cloth diapers, it’s either because they aren’t getting changed soon enough after soiling a diaper (which can happen in disposables, too) or it’s because there is an issue with the wash routine.

5. You never run out of diapers.

It is true you may run out of clean diapers and need to do more laundry, but no more realizing you don’t have any diapers left and having to run to Target before bed to get some.

I’m not going to pretend everything is sunshine and roses with cloth diapers. They are diapers, after all…and the key thing that comes to mind with diapers is POOP. That means there certainly is potential for some mess. I firmly believe any cons have workable solutions, or that the pros outweigh them. However, in the interest of helping you make the most informed decision possible, I will share some cons I’ve experienced over the past 5 years of cloth diapering.

Depending on the style of diapers you go with, your upfront investment may be anywhere from $300 to over $1000. For families on a very tight budget, this may seem unattainable.

Solution: There are ways you can save money on quality cloth diapers. You can shop sales and use coupons. You can also buy your diaper stash used. A lot of people think that is gross, but diapers are able to be sanitized. As long as they were treated well by previous owners and are in good condition, buying used is a perfectly good way to create your diaper stash on a budget. Buying used is also a great way to lessen your environmental impact!

2. You have to clean poop off of them.

Solution: Try different methods of poop removal to see which you like the best. Every family ends up finding a method that they can use with ease.

I know the thought of extra laundry sends many people in a tizzy. After all, laundry is hard enough to keep up with as it is, right? In reality, it adds 2-3 loads of laundry a week. If you are the kind of person that does laundry once a week or even less, this may seem like a lot.

Solution: Get yourself into a good laundry routine. In my home, we aim for one load a day. Between my husband, the kids, and myself, we definitely have plenty of clothes to wash throughout the week. When you factor in towels and sheets, there’s another load or two.

We try to throw the laundry in the washing machine in the morning, get it in the dryer after work, and put it away before bed. Doing one load a day also means the loads aren’t overflowing (I’m a big believer in not overstuffing your washer–it doesn’t get your clothes as clean and can actually break your washer) which means that folding clothes is a MUCH easier feat. Our laundry schedule may look like this:

I have used two different daycares and have been fortunate that both have allowed cloth. However, I know the laws are different in every state, and some daycares may have their own policies against them.

Solution: Be upfront as you interview daycares about the fact you want to cloth diaper. Ask what their rules are surrounding cloth.

If they haven’t used cloth before, ask if they would be willing to try if you make it as simple as possible for them (that means having some pockets or all-in-ones to send so they can go on the same way a disposable would). Tell them you will dispose of the poop at home and they can just roll up the diaper and put it in the wet bag.

If you send diapers that are easy to put on and tell them they don’t have to clean solids off the diapers, most daycares will be flexible with you unless you have a law in your state that prevents them from being so.

5. Cloth diapers also require the use of some resources.

Sometimes, pro-cloth diaper companies and individuals will focus on all the resources used to create disposable diapers and why that makes cloth a better alternative.

It wouldn’t be fair to say this without making note that there are resources involved with the manufacturing and care of cloth diapers, too.

If you are looking for a resource free solution, that would probably be elimination communication, which I know very little about and won’t discuss here.

The fact of the matter is that babies and people in general will have some sort of impact on the planet. All we can really do is just do what we can to lessen that impact.

One thing that we can say about the resources involved in using cloth diapers is that they are almost always less. There are some myths floating around about how disposables use less resources when you factor in the water and energy used to clean cloth, but that really isn’t true. Disposable diaper manufacturing uses lots of water, and some estimates are as high as 9 gallons per one diaper.

Solution: If you want to purchase natural fiber diapers, consider organic to lessen the impact of chemicals on the environment. You can also choose to purchase diapers made from synthetic materials like PUL, which the majority of cloth diapers are made from nowadays.

What do you think? 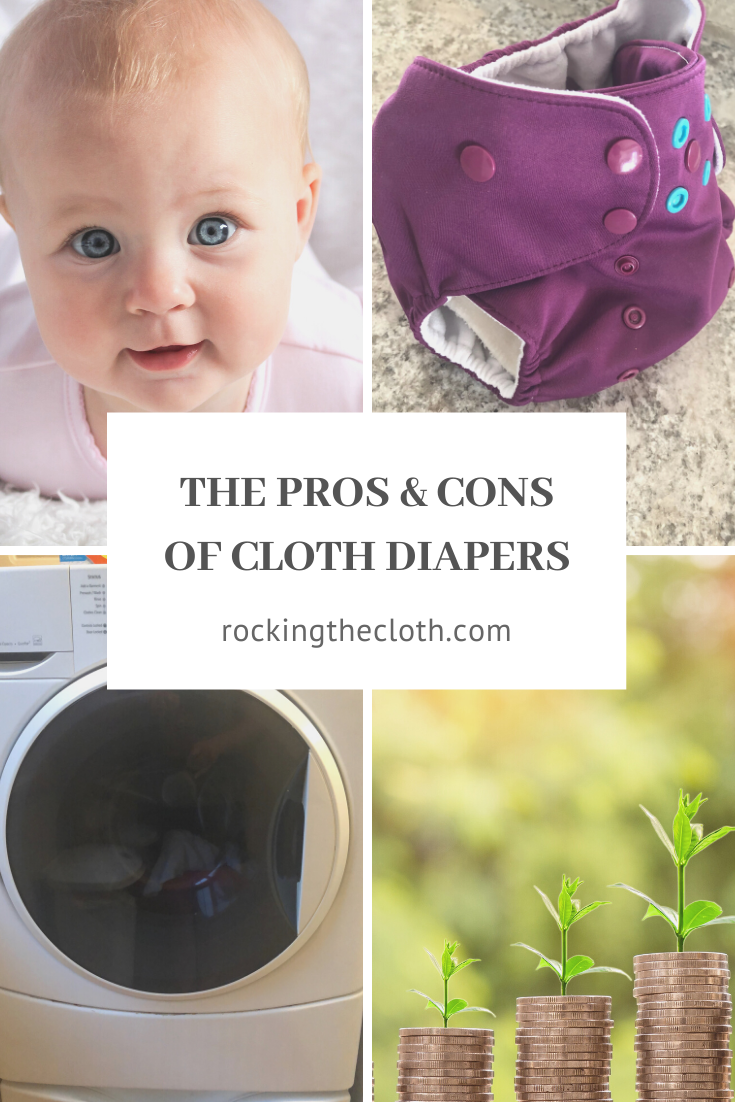 About the Author: Holly Lee

I'm Holly and I'm the mom of three amazing kids (two boys & a girl). We have been cloth diapering for several years. My family and I live in Minnesota with our dog, Ruby, and cat, Gherkin. Outside of Rocking the Cloth, I am also a middle school teacher. Thank you for visiting Rocking the Cloth--feel free to email me at holly@rockingthecloth.com if you have any questions or concerns. I'd love to help!

This site uses functional cookies and external scripts to improve your experience.

NOTE: These settings will only apply to the browser and device you are currently using.